How To Treat Hemorrhoids At Home

Many people today have to endure the many annoying symptoms of hemorrhoids. This condition is actually characterized by the inflammation and swelling of the veins around the opening of the anus, which can be painful. In fact, there are certain hemorrhoid cases when blood is actually observed coming from the veins.

Although hemorrhoids or piles is not life threatening, it is best that you address it as soon as possible, so that it won’t get worsen. Keep in mind that there are different stages in hemorrhoids and if you let it progress to the latter ones, then it may require you to go through surgery in order to take care of it.

Having hemorrhoids is actually very uncomfortable, since you won’t just feel them when you are trying to relieve yourself, but also when you are sitting down. When the veins that are swollen would begin to protrude, you can actually feel them whenever you try to move your lower body. Aside from that, hemorrhoids can also make its presence known through burning sensations and itchiness.

One of the best ways to treat hemorrhoids at home is through the use of Aloe Vera gel. You can actually purchase them from the nearest pharmacy or grocery store, which you can apply on the part of your anus, where you can feel the swollen veins.

The gel actually has a cooling effect, which will provide you relief from the itchiness and pain caused by the hemorrhoids. Aside from that, it will also improve its condition, by reducing the swelling. 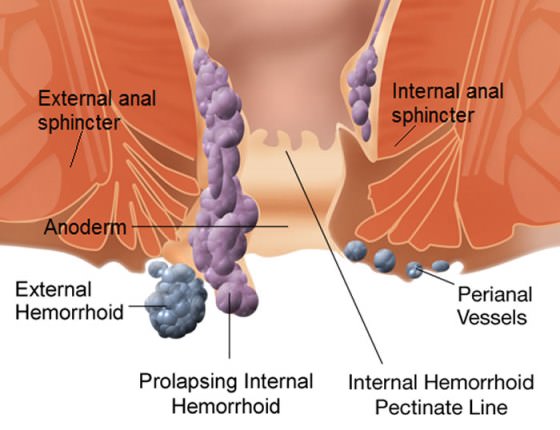 If you want its natural form though, you can also obtain your own Aloe Vera plant, which you can easily take care of, since it can grow even in a small pot. All you have to do is to slice a leaf from it, and open it up to extract its gel.

One of the most common causes of hemorrhoids is constipation. This is because the dry bowel can eventually irritate the veins around your anus, when you constantly put pressure on it to relieve yourself. Thus, it eventually gets swollen and starts the hemorrhoids to develop. Thus, it is best to treat the main culprit behind hemorrhoids which is constipation. It is not a good idea to take certain medications for this, since it can have untoward effects.

The best way to address constipation is to change your diet, and focus more on eating fruits and vegetables, since they are loaded with moisture and dietary fiber. Fiber will actually make your bowel softer to prevent constipation. Aside from that, it would also facilitate the flushing out of toxins from your body, which will improve your overall well being.

Take note of these things that you can do, which can help you treat hemorrhoids at the comforts of your own home. Keep in mind that these are intended for hemorrhoids that are still at its initial stages. Thus, if your case already involves bleeding from the piles, then it may be a good time to call your doctor and set and appointment with him.